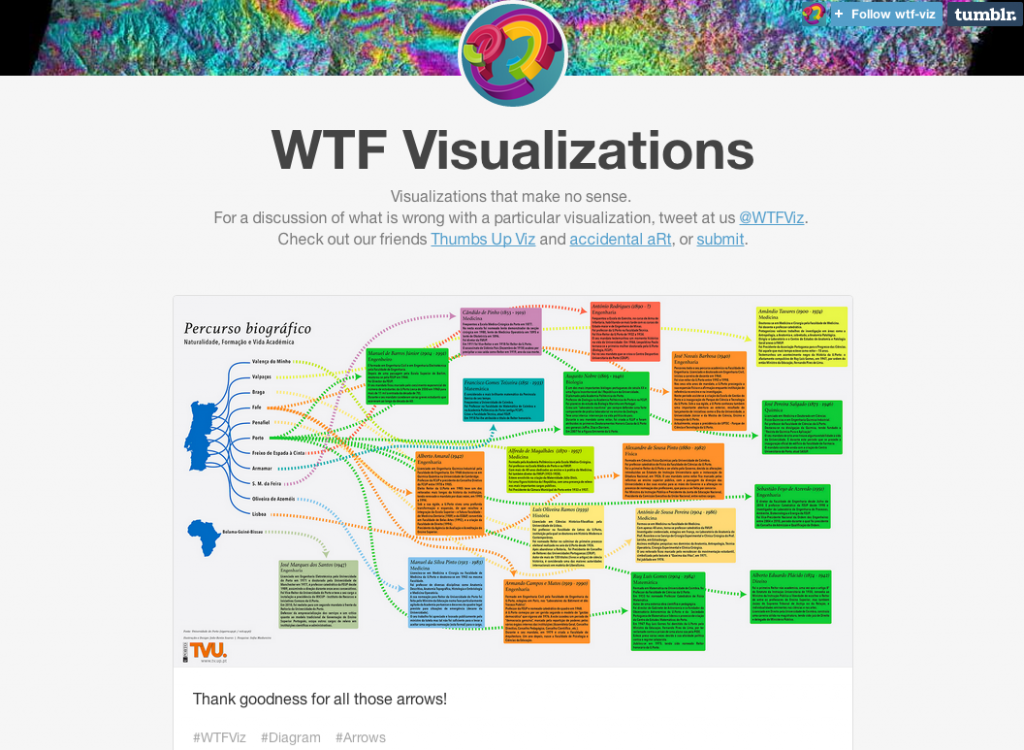 Above all, however, they are simply fun to look at. If you’ve spent some time getting lost in all of the projects on Visually’s community page, you know what I mean.

As visual content has exploded in popularity over the past few years, so have the places to discover the best ones. Check out five of our favorites below.

Curated by: Jason Oberholtzer, Cody Westphal, “Chartists in Residence” | @ilovecharts I Love Charts is one of the best known visual blogs on the web. Created by Jason Oberholtzer and Cody Westphal in 2009, the Tumblr has been going strong ever since. There are multiple posts every day from either Oberholtzer, Westphal, or their team of Chartists, who contribute a wide range of content. I Love Charts: The Book, expands the blog’s chart curation to tackle the idea of why charts are so engrossing and addictive.

Curated by: Bloomberg Visual Data Team | @BBGVisualData While data-driven news outlets have catapulted into the public eye recently in FiveThirtyEight, The Upshot, and Vox, few have produced truly stunning visual news projects. Bloomberg has built a world-class team entirely devoted to researching, creating, and publishing newsworthy visualizations. While Bloomberg publishes less frequently than a blog might, the quality is unmatched. For a more in-depth look at the brains behind Bloomberg Visual Data, check out this conversation between Visually and the Bloomberg team.

Curated by: Seth Kadish | @VizualStatistix  Vizual Statiztix is the passion project of Seth Kadish, a Ph.D-wielding data scientist with a soft spot for visualization. All of Kadish’s posts are custom projects that he builds in his free time. In each post, Kadish describes the data source that he used, his methodology for creating the visualization, and a bit of context.

Curated by: Jishai Evers | @DadaViz Dadaviz’s Twitter bio begins with “Data nerds + Art lovers = dadaviz,” which couldn’t be more apt. The site is beautifully designed and incredibly easy to read – and that’s before diving into the content. Each scroll up and down reveals a new expertly curated visualization. With hundreds of projects listed and new ones added every days, Dadaviz is a must visit.

Curated by: Drew Skau | @WTFViz Visually’s own Drew Skau is no stranger to data visualization – both the great ones and the not-so-great ones. WTFViz is devoted to the latter, where all of the web’s most perplexing charts and graphs can go to rest. Included in WTFViz are pie charts that total more than 100%, visualizations based on bogus statistics, and plenty of nonsensical jargon.

Jon Salm is an associate client analyst at Millward Brown Digital in New York City and a freelance data journalist in the Visual.ly marketplace. He has a bachelor’s degree in English from Washington and Lee University. You can follow him on twitter @Jon_Salm.

How to Create Data-Driven Buyer Personas with Google Analytics

Which of the 3 Types of Data Storage is Best for Your Business?